I’m trying my best with the language but asking the flower vendor if I could ‘marry her llama’ was just sloppy Spanish.

I totally forgot President  Obama was coming to Buenos Aires until I tried to go the zoo and the entire park was closed for his visit.  And just like in the U.S, they’re blaming him for all kinds of  stuff. 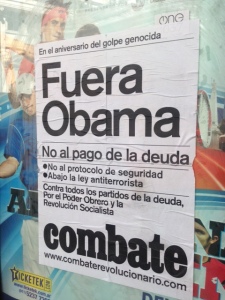 Today is the 40th anniversary of a military coup that began a reign of torture and kidnapping that scarred millions of Argentinians.  Meeting the the Argentine President, Obama acknowledged the U.S.’s failure to oppose the human rights atrocities, but like the poster says, many here don’t think that ‘pays the debt’.

What else?  Tried the national drink today, “Yerba Mate”.. a sort of green tea brewed in a mah’-tay cup and drunk through a filtered straw. 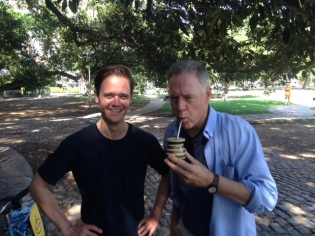 Luke, our tour guide brewed up a batch in the shade of a banyan tree. My new Aussie pal, Max and I gamely slurped it down and then fell into a brief ‘mate coma’. The anecdote is a caipirinha cocktail. (see photo at top)

Finally today, I’ll share some random pictures that are suitable for framing especially if you have lots of blank wall space.