Even if you grew up in California as I did, Alaska is one of those places you intend to get around to visiting someday…. but usually don’t.  We would have followed that pattern ourselves if not for our local food writer, Laura Reiley who published an article on her voyage aboard a 79 passenger ship in Southeast Alaska’s Inside Passage.   It was by far the most dough I ever spent on a vacation (thanks, Laura) but not something I’ll ever regret.  Here’s why:

The Wilderness Explorer looks pretty big sitting proudly in the Fjord, but alongside the Disney and Carnival ships that operate nearby, it’s practically a dinghy.  With about 70 guests and 25 crew, this boat is as intimate or anonymous as you want to make it.  Over the course of 7 days from Juneau to Ketchikan my wife, Sandy, my daughter Caitlin and my son, Patrick decided to make friends…  mostly with the fun loving proto-Americans known as Australians.

My best mates on board.

Such fun to share this with our grown kids. Got our Holiday photo too!

7 Days and we never saw another tourist boat. Seems impossible!

The last picture in this group above really captures the mind blowing beauty of this place (if I say so myself) If you did nothing but stand on the deck looking at the scenery, it would be a week very well spent. But of course we did lots more.

All four of us read John Muir’s Travels in Alaska before the trip. Fun to retrace parts of his voyage from the 1870’s.

Aside from the perfectly delightful dining, snacking and boozing on board, Uncruise encourages you to get off the ship to kayak, standup paddle board, take hikes on shore or just zip around in inflatable Zodiac Skiffs with experienced tour guides at the helm.

Bears? Yeah we saw bears, but only once.  We came across four Brown Bears (same as Grizzlies except coastal) cavorting in a meadow alongside the beach. We weren’t there 20 minutes before one bear spotting seaplane after another touched down in the same little inlet to ogle the Ursas.  The bears seemed oblivious. 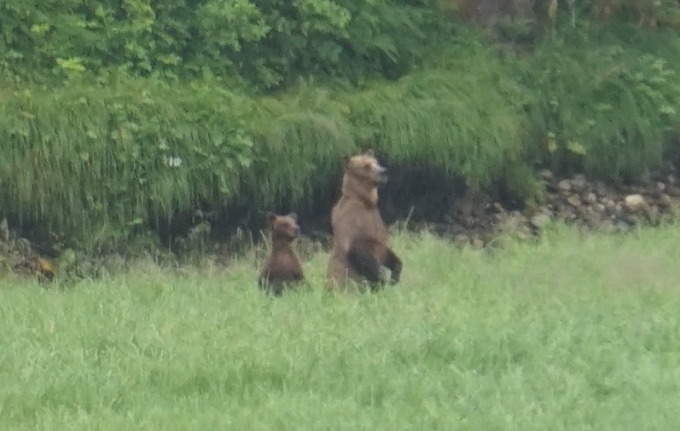 Whales? Yeah we saw whales- Humpbacks (I call them ‘Backies’ just to confound those who call them “Humpies).  Also, Orcas.  My pictures do not even resemble the whale photos featured in the UnCruise brochure in which passengers on deck are in the shadow of  and soaked from the drool of a breaching leviathan. But  this is what we saw: 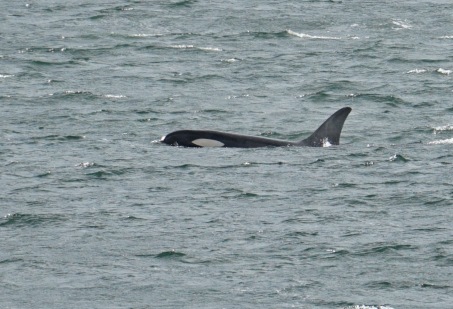 Whale watchers have been tracking this guy with the screwy dorsal fin for over 30 years.

Remember Northern Exposure?  That terrific 90’s TV show formed my impression of small town Alaska.  Talkeetna is said to be the inspiration for Cicely, AK, but the two towns we stopped off in during our cruise (Wrangell and Petersburg) would have worked nicely as well.

We dropped anchor off the shore of Wrangell Alaska on the 3rd of July.  We stayed up late to watch an anemic fireworks show that had to wait until nearly midnight for it to get dark enough.  We came ashore in the morning to witness the kind of Independence Day Celebration our Great Grandparents would recognize. 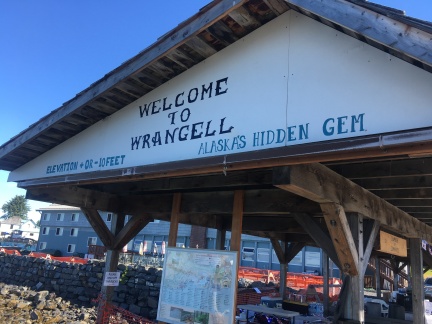 Chainsaw Competition. What could go wrong? 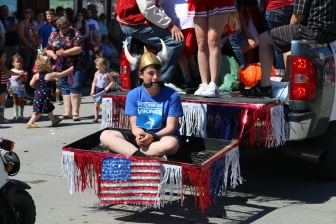 Where binding and gagging your high school rival is fun!

The highlight for me were THE GLACIERS. Like nothing I’ve ever seen before, they’ve been described as mountains of moving ice or slow-motion frozen rivers. And though they’ve retreated dramatically since John Muir’s explorations in the 1870’s, they remain God’s landscaper, carving out valleys, bays and fiords at their own ‘glacial’ pace. 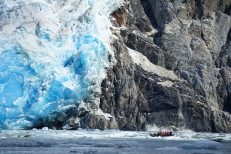 Final notes: Food was good. Drinks were great! UnCruise offers a buffet breakfast and lunch plus a table service dinner with unlimited beverages. Plus, a first rate bartender stands ready to pour a local beer or mix up a craft cocktail at all hours.

We had a mid level cabin that was basic but very comfortable. The salon has a well stocked library and a ukulele to strum. Fresh baked cookies are on offer in the afternoon with coffee and tea.

The crew is gracious and well versed in the history, geology and zoology of the area, some giving very good lectures with powerpoint slides in the evening.

Sandy and Caitlin on deck 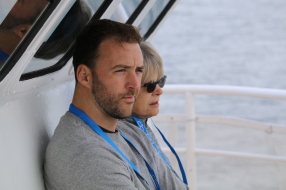 Bald Eagles as common as crows 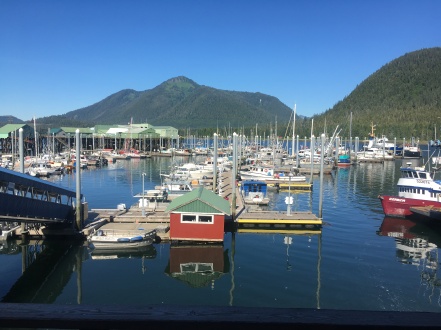